The Crosses of Legend

The Crosses of Legend

Living in West Virginia, the sight of three crosses on a hillside—the center painted gold, flanked on each side by a pale blue one—is a common sight.

However, until I attended a presentation recently by a Marshall University professor, I didn’t know much about the fascinating story behind them.

David Pittenger, dean of MU’s graduate college, has spent the past three years traversing the state to photograph and catalog the many groupings of crosses.

His colorful, self-published book about the project, Mr. Coffindaffer’s Crosses: A Study of Public Art, is worth the $49.99 cost.

The title originates with the creator of the cross displays, Bernard Coffindaffer. The West Virginia businessman founded the nonprofit organization established to erect them as a silent witness to his Savior.

Taking up the Cross

Pittenger told of going great lengths to track down dozens of the displays, thanks to Coffindaffer’s spotty record-keeping and their often-rural locations.

At one point, a reclusive homeowner demanded to know, “What are you doing?”

Tactfully, the professor replied, “I admire your crosses and was taking pictures of them.”

That touched of a friendly exchange. The landowner recalled how the crosses had been cared for by his parents and grandparents before all passed on.

Even though Coffindaffer, a former oilman and business owner, died in 1993, his work has been picked up by a woman in Vicksburg, Mississippi.

Renamed Crosses Across America, the nonprofit reports on its website that nearly 1,900 clusters of crosses have now been erected in 29 states.

According to Pittenger, the group is seeking to raise funds for maintenance and refurbishing of the crosses. Some have been on display for 35 years and naturally are showing signs of age.

Ironically, I learned the fuller story about the crosses not long after the U.S. Supreme Court ruled a “Peace Cross” could remain on public land in Maryland.

The legal challenge to such displays isn’t likely to be the last. So, on the day of Pittenger’s talk, I gained a new appreciation for Coffindaffer’s project.

While anti-religionists can continually invent ways to attempt to censor any public displays of faith, they aren’t too likely to succeed when it comes to the cross trios.

That’s because Coffindaffer secured permission from private landowners for his displays, drumming up business while preaching in Methodist churches and speaking to various groups.

(Of course, in a rural state one can’t underestimate the power of word-of-mouth advertising.)

So, while such sites may anger folks from the American Humanist Association—which sued to get to the Maryland memorial removed—they don’t have a legal leg to stand on when it comes to Coffindaffer’s crosses. 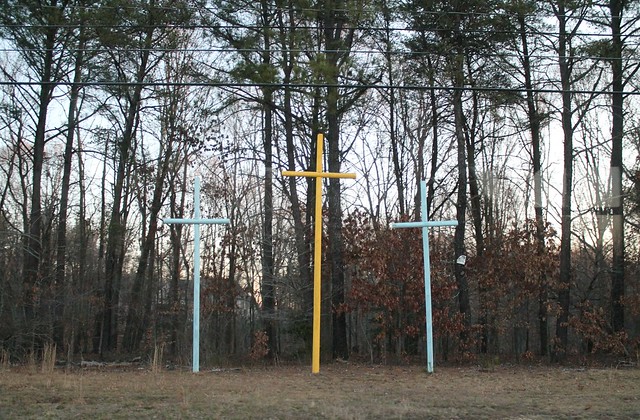 Because the professor’s talk covered the landscape of these crosses as public art, he didn’t get into the topic of personal faith.

Pittenger also included some facts about Coffindaffer’s personal problems. But those things didn’t bother me; we’re all human, and failings are part of our journey through life.

What impressed me was Coffindaffer responding to what he felt was a divine call (you can read more about it on Crosses Across America’s website).

I sensed the same kind of call in 1988. It happened as I sat in my office after the collapse of my business. Suddenly, I sensed a whisper-quiet voice saying, “I want you to use your writing talent for Me.”

So, the call Coffindaffer reported hearing is quite real. Years later, his response can be seen far and wide. In my estimation, a pretty good legacy.